You are here: Home / News / Technical news / What is an Engine Side mounted PTO

What is an Engine Side mounted PTO

What is an Engine Side mounted PTO

Power take-offs (PTOs) are mechanical gearboxes that attach to apertures provided on truck transmissions and are used to transfer the power of the vehicle engine to auxiliary components, most commonly a hydraulic pump.

Typical examples of use are lifting equipment such as loaders, telescopic handlers and fork lift trucks where  the PTO is used at a high load for short periods (approximately 30 seconds) for a relatively low proportion of  the engine life.

Also, most commonly, it is a splined drive shaft installed on a tractor or truck allowing implements with mating fittings to be powered directly by the engine.

Semi-permanently mounted power take-offs can also be found on industrial and marine engines. These applications typically use a drive shaft and bolted joint to transmit power to a secondary implement or accessory. In the case of a marine application, such shafts may be used to power fire pumps. 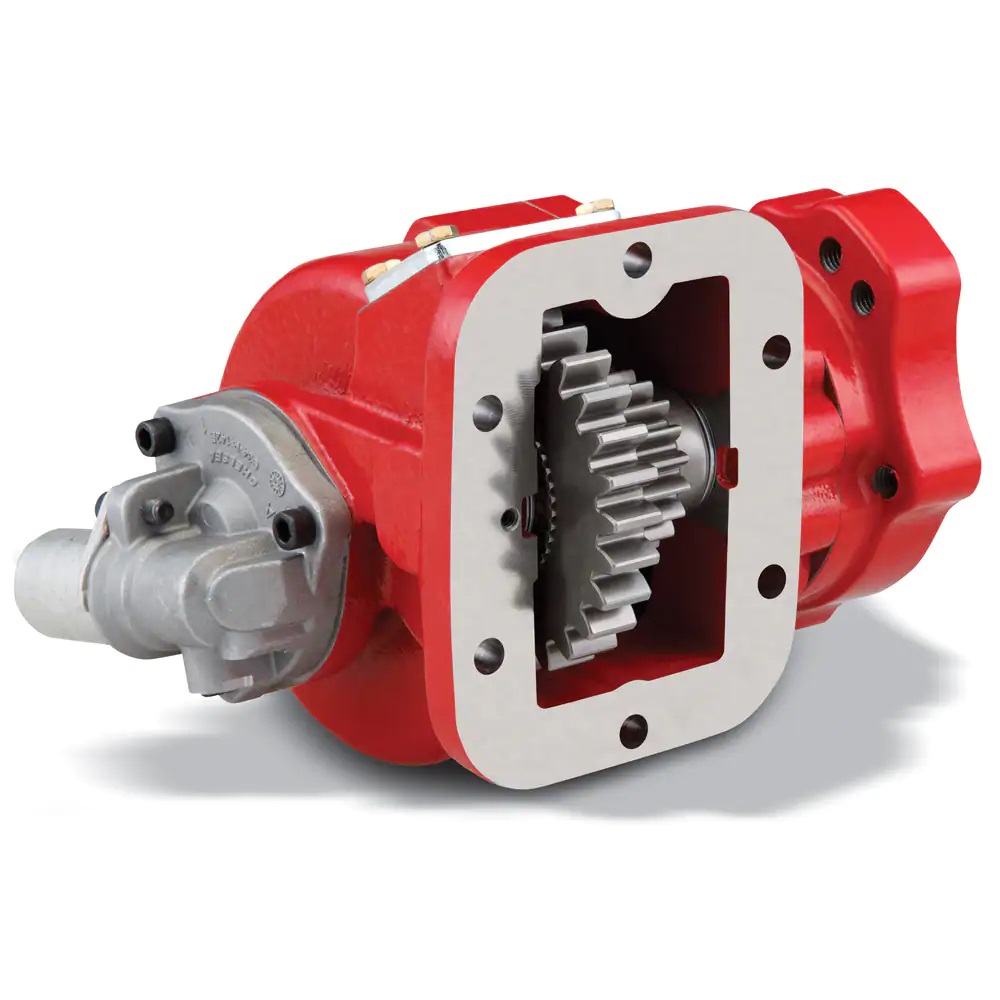 The PTO and its associated shafts and universal joints are a common cause of incidents and injury in farming and industry. According to the National Safety Council, six percent of tractor related fatalities in 1997 in the United States involved the PTO. Incidents can occur when loose clothing is pulled into the shaft, often resulting in bone fractures, loss of limb, or death to its wearer. On April 13, 2009 former Major League Baseball star Mark Fidrych died as a result of a PTO related accident; "He appeared to have been working on the truck when his clothes became tangled in the truck's power take-off shaft", District Attorney Joseph Early Jr. said in a statement.[4] Despite much work to reduce the frequency and severity of agricultural injuries, these events still occur. Power take-off entanglements are one example of agricultural events that can lead to death or permanent disability. [5]

Some implements employ light free-spinning protective plastic guards to enshroud the PTO shaft; these are mandatory in some countries.[6][7] In the UK, Health and Safety Executive guidance is contained in a leaflet.[8]

Agricultural PTOs are standardized in dimensions and speed. The ISO standard for PTOs is ISO 500, which as of the 2004 edition was split into three parts:

Due to ever-increasing horsepower requirements from farm implements, and higher horsepower engines being installed in farm tractors, a still larger type (designated as Type 4) has been added to ISO 500. It operates at a higher rotational speed of 1300 rpm in order to allow for power transfer at reduced levels of torque. The shaft has 22 splines with a major diameter of 57.5 millimeters (mm). It is meant to handle PTO powers up to 450 kilowatts (kW), or roughly 600 horsepower (hp).

All four types rotate counterclockwise when viewed from inside the tractor's cab; when standing behind the tractor, the shaft turns clockwise.

A 10-spline type was used with some early equipment such as the 1948 Land Rover. A six-spline adapter was usually supplied. It is customary for agricultural machines manufacturers to provide the nominal PTO power specification, an indication of the available instantaneous power at the shaft. Newer tractors may come equipped with 540/540E and/or 1000/1000E options that allow the tractor to power certain low-power-demand implements like hay rakes or tedders using lower engine speeds to maintain the revolutions per minute needed, using less fuel and placing less stress on the engine – thereby improving efficiency and reducing costs.

The first industry standard for PTO design was adopted by ASAE (the American Society of Agricultural Engineers) in April 1927. The PTO rotational speed was specified as 536 ± 10 rpm; the direction was clockwise. The speed was later changed to 540 rpm.[9]

Use on commercial vehicles

A hydraulic PTO mounted on a truck gearbox

Truck transmissions have one or more locations which allow for a PTO to be mounted. The PTO must be purchased separately and care is required to match the physical interface of the transmission with a compatible PTO. PTO suppliers will usually require details of the make, model and even serial number of the transmission. Care is also needed to ensure that the physical space around the transmission allows for installation of the PTO. The PTO is engaged and disengaged using the main transmission clutch and a remote control mechanism which operates on the PTO itself. Typically, an air valve is used to engage the PTO, but a mechanical linkage, electric or hydraulic mechanism are also options.

Most Unimogs come with front and/or rear PTOs and hydraulics as well as three point hitch systems.

Units will be rated according to the continuous and intermittent torque that can be applied through them and different models will offer different "PTO shaft rotation to engine RPM" ratios.

In the majority of cases, the PTO will connect directly to a hydraulic pump. This allows for transmission of mechanical force through the hydraulic fluid system to any location around the vehicle where a hydraulic motor will convert it back into rotary or linear mechanical force. Typical applications include:

Running a water pump on a fire engine or water truck

Operating a winch on a tow truck

Operating the compactor on a garbage truck

A split shaft PTO is mounted to the truck's drive shaft to provide power to the PTO. Such a unit is an additional gearbox that separates the vehicle's drive shaft into two parts:

The gearbox-facing shaft which will transmit the power of the engine to the split shaft PTO;

The axle-facing shaft which transmit the propelling power to the axle.

The unit itself is designed to independently divert the engine's power to either the axle-facing shaft or the additional PTO output shaft. This is done by two independent clutches like tooth or dog clutches, which can be operated at total driveline standstill only. Because the main gearbox changes the rotation speed by selection of a gear, the PTO cannot be operated while the vehicle is moving.

On 4x4 vehicles, only the rear drive shaft is used by the split shaft PTO gearbox, requiring the vehicle's 4x4 drive scheme to be of the selectable 4WD type to keep the front axle drive shaft completely decoupled during PTO operation.

It is also possible to connect something other than a hydraulic pump directly to the PTO: for example, fire truck pumps.

A "sandwich" type split shaft unit is mounted between engine and transmission and used on road maintenance vehicles, fire fighting vehicles and off-road vehicles. This unit gets the drive directly from the engine shaft and can be capable of delivering up to the complete engine power to the PTO. Usually these units come with their own lubricating system. Due to the sandwich mounting style, the gearbox will be moved away from the engine.